Disclaimer: this article is NOT sponsored or affiliated with WordDive in anyway. We just wanted to do an experiment out of our curiosity towards their app.

More and more people are starting to use modern technology for language learning. There are many apps that are designed for learning words in a new language. Most popular of them being Duolingo. Unfortunately Duolingo doesn’t offer Finnish language… Yet.

Luckily there is another option that comes straight out of Finland. It is an app called WordDive.

This is how it is introduced on their website:

”WordDive is designed to solve the biggest issues that stop us from actually using a foreign language on a holiday trip, at work and in other practical situations. The most important of these issues are mastering roughly 2 000 frequently used words and a good command of basic grammar.

When you know these well enough to produce them automatically, it is possible to form thoughts in the new language. This will very quickly lead to the ability to speak the target language. With the help of artificial intelligence, you can learn a new language in three months.”

I invited Kreeta to do a 30 day WordDive experiment so that we could actually see if this app is as good as it claims to be.

The background of this experiment: 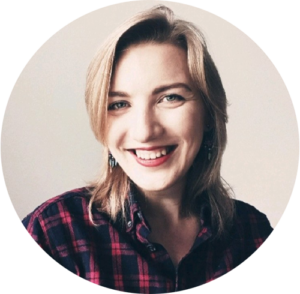 Kreeta’s native language is Estonian. She has studied Finnish by completing two traditonal Finnish language courses. One in Työväenopisto and another one in Aikuisopisto. Those two courses helped her to move from the skill level zero to B 1.2. After that she took two intensive speaking courses. In addition to formal language courses, she has been visiting Cafe Lingua and Suomi Sujuu meetings regularly. The intensive speaking courses and informal discussion groups gave her the confidence to start using Finnish in her everyday life.

The specifications for this experiment:

Amount of studying: At least three and a half hours per week

App: WordDive was used approximately 97 % of the time on a mobile device

Earlier experience on using apps for language learning: None

Courses that she took in the app:

After 30 days I interviewed Kreeta to see how she liked the app and to find out, did it help her to learn Finnish.

Here is the interview:

How does the WordDive app work?

First, you select what areas of the language you want to develop and what is your goal. I selected advanced Finnish 1 (apparently this is B2 level in the CEFR scale). You will have courses and each course will have 5 lessons. The last lesson in each course is a refresher for revising the words learned earlier. 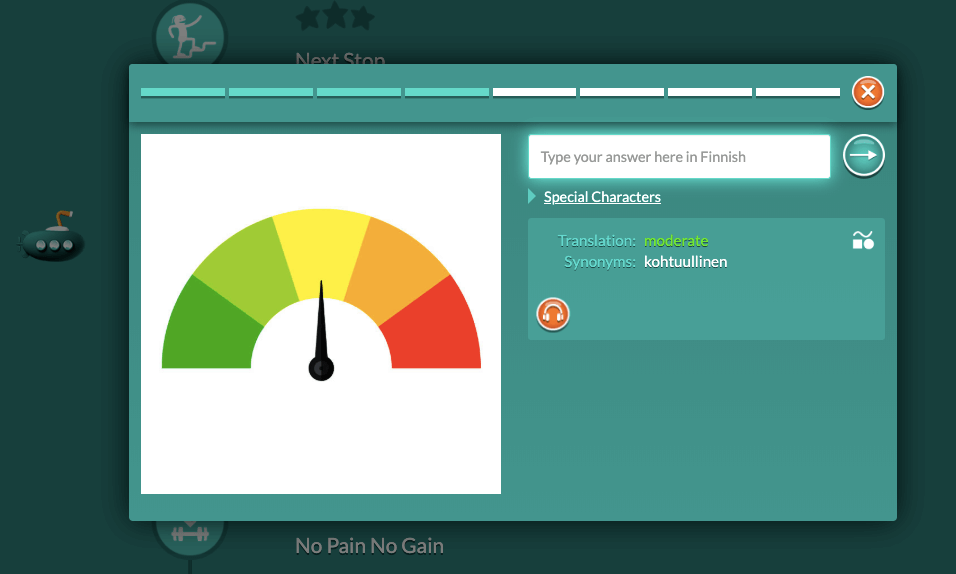 Do you prefer using the app on computer or mobile?

I try to use mobile versions of things, because they tend to be more flexible and user friendly. For this 30 day experiment I used only the mobile version. After the 30 days I tried the desktop version for the first time and found out that it had many useful functions that were not present in the mobile version.

I really like that the desktop version shows you where you made the mistake when spelling a word. Compared to the mobile version the desktop is so much better – I actually might keep using it after this 30 day experiment.

The keyboard makes the biggest difference – I feel like when I have to type the entire word on my normal keyboard, I have to think about it more and it makes me remember the word better. 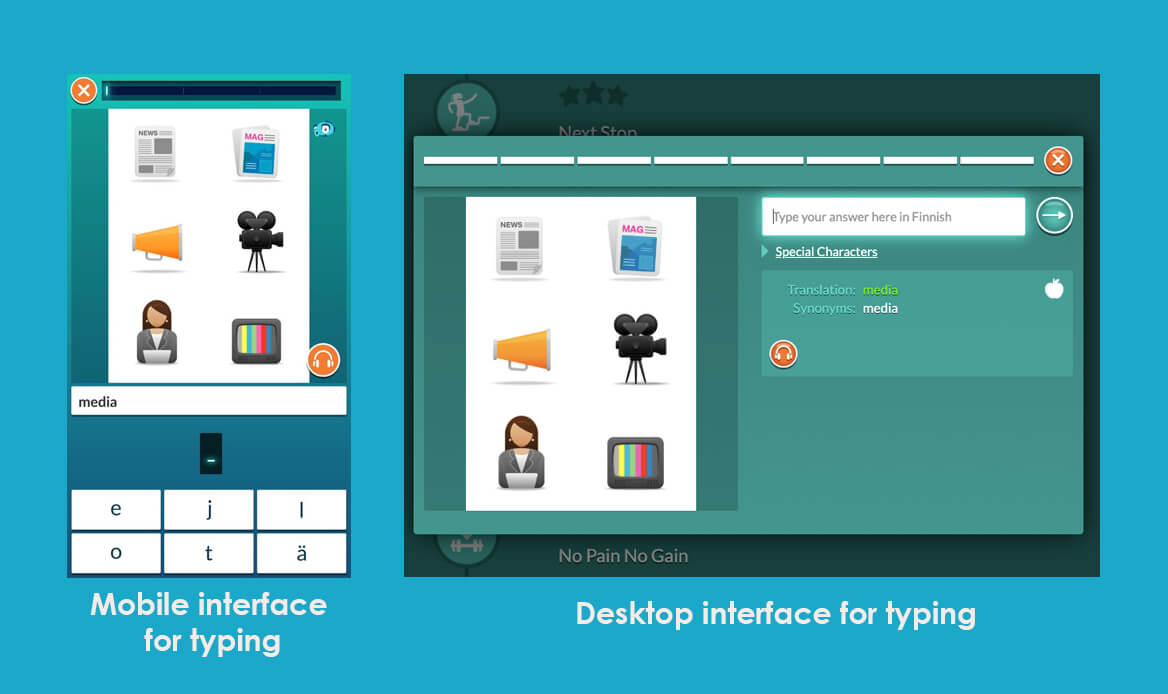 Is the app challenging enough?

It was definitely not too challenging, perhaps just the right level. Some of the words were too easy. Maybe because these words have been taken from English and modified just a little bit to become Finnish words. 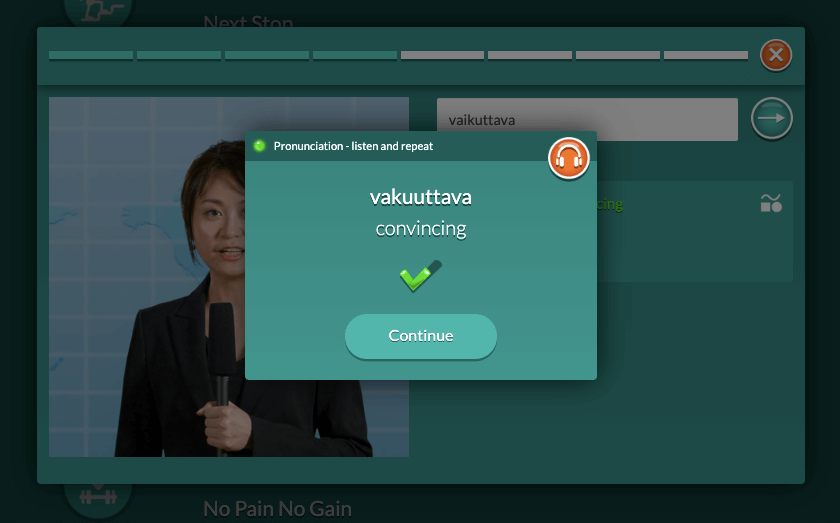 Did you find using the app for learning Finnish interesting, boring or something in between?

I would say in between. Positive sides were that the topics were interesting, I had environment, politics and media. So definitely relevant topics.

Negatives were that the words were repeating a lot, heavy focus on spelling 100% correctly and that every word had only one example sentence accompanying it. For example for the word "tuhlata" had the sentence "älä tuhlaa vettä". Every time I had to spell this word, it had that same sentence as an example. I thought it was a bit boring, maybe it would be useful to learn different sentences on how to use this word.

Is the app comprehensive for learning Finnish or is it missing some aspect of language learning?

The app is missing the ability to be proactive in using the words. Perhaps a fill in the blanks exercise? Not sure if that would be enough. Making sentences would be better, but not sure how the app would check those for typing mistakes.

Did using the app regularly support you in using Finnish language in your everyday life here in Finland?

Not really, because I did not find any use for these words in my everyday life. Perhaps if I had read the news during this time, I would have found them easier to understand.

What are the best things about the WordDive app?

The topics are relevant and the words seem useful. But the thing is that the words on advanced level would be useful in more complicated conversations. The interface looks fun to use. The example pictures accompanying the words can be quite entertaining.

Many of the example sentences were decent. They seemed the kind of sentences that you might find in a newspaper. I think that this app is very useful if you want to be able to read and understand the news in Finnish.

The app really knows how to motivate you. It clearly shows your progress and after the course you even get a certificate! 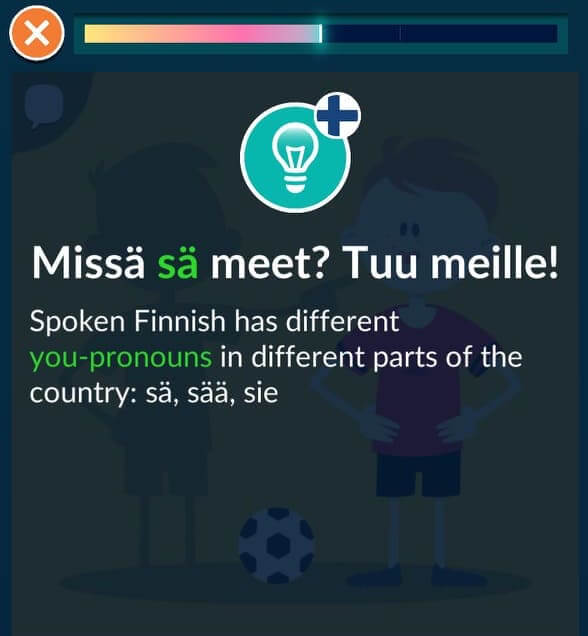 What are the worst things about the WordDive app?

The spelling interface on mobile is irritating, because the letters keep changing positions. The app teaches you a lot of words but many of them are hard to implement in my everyday life.

There is an imbalance in the app either for being too easy or too hard. In the first round of a lesson you have to choose the correct translation for the word from four options. In many cases it’s too easy to figure out the right answers based on the fact that the other three options obviously aren’t correct.

The app gets hard quite quickly. When the word appears for the second time and you have to spell it 100 % correctly. So you move from too easy to too hard. It would be good to have something in the middle to make the transition smoother.

At least on mobile, the app limits on how much I can use it per day. Usually the app stopped me approximately after 45 minutes and I couldn’t study that course anymore on that day. If I am paying for the app there shouldn’t be any limitations in my opinion.

How could the app be improved?

The verbs could be differentiated from nouns by adding the word ”to” in front of the verb. For example when the app asks for the word ”respect” it could be the verb ”kunnioittaa” or the noun ”kunnioitus”. That’s why it would be clearer for the user if in front of verb there would be ”to”.

On mobile the typing interface while spelling the word isn’t the best one. I wonder why they don’t just let me use my phones keyboard? That’s how I would learn how to write Finnish more quickly on the phone. That would be an useful skill to develop. I’m used to typing quite quickly, so it’s annoying when the letters change places and because of that I make mistakes that forces me to repeat the word in the future even though I would have known the word.

When I have to choose the right translation for the word from four options the three wrong answers could be more relevant and from the same topic so that it wouldn’t be too easy. 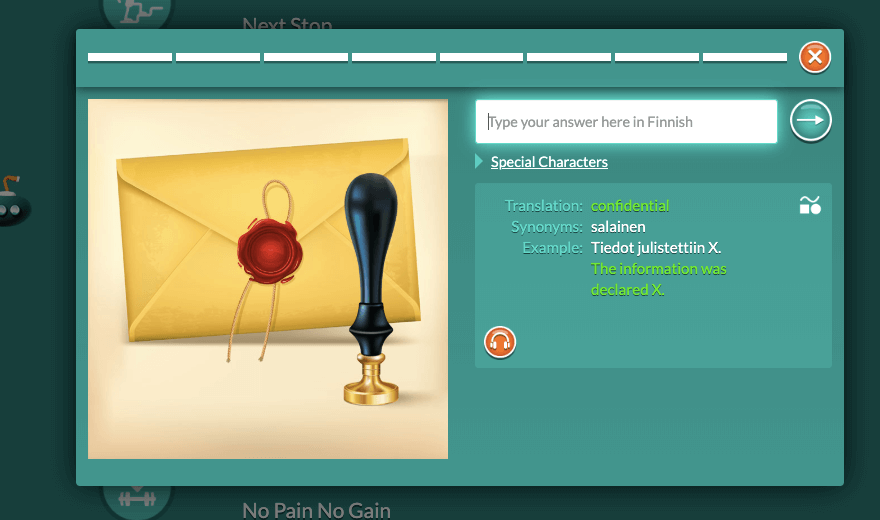 WordDive is a good app for learning new words. The app tries to make sure that the words stick in your brain by using high quality images, example sentences from real life and also by requiring you to spell the words 100 % correctly. The requirement for 100 % correct spelling might be useful to people who are using the app for academic purposes but for the rest of us this kind of perfectionism is a burden.

The desktop version is clearly better than the mobile one. Especially the fact that you get to use your own keyboard makes a difference. For learning everyday Finnish, the spoken language course was excellent. Especially with the realistic example sentences and background information about the words.

The app keeps you on track by showing in real time the progress you have made. It motivates you by giving encouraging feedback every time you complete a lesson. The fact that WordDive sends a professional certificate after you’ve finished a course is quite impressive and motivating as well.

The app definitely has some shortcomings too. The mobile typing interface is frustrating, especially to people who are used to typing fast. It might be that the purpose of the app is to focus only on output, but I could use a bit more of input as well for solidifying these words in my memory. By input I mean creating my own sentences or at least filling in the blank with the words that I’ve just learned.

I’m not sure, if the app is worth 9,99 €/month, but it is absolutely worth a try. They offer a one week free trial.

Have you used WordDive? What’s your opinion about the app?

Let us know it in social media! 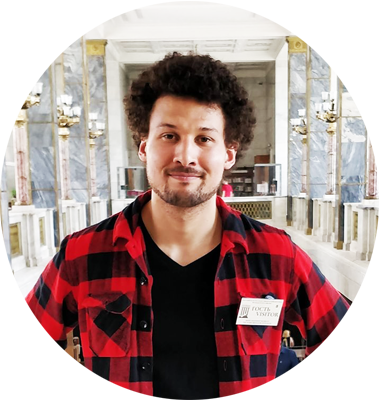 Seuraa / Follow
This error message is only visible to WordPress admins


Error: API requests are being delayed for this account. New posts will not be retrieved.